Che Guevara: Most Influential Icon of the Youth!

When I took pen to write about my favorite role model hero Argentine born Cuban Marxist revolutionary Ernesto Che Guevara my taught becomes hotter and my words became like fire. Rebel youth icon recognized across the globe without any discrimination.Che known for its fighting spirit,firing thought,gunning action and inspiring ideology.When Americans gunned down Che everyone thought its end of the legendary Che ideology but it starting point of the Che legacy. 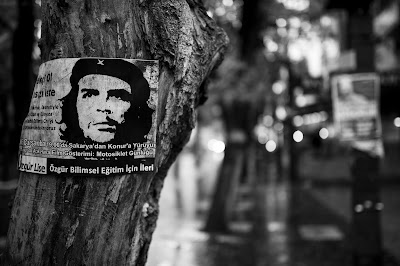 Che right from birth is known for fighting spirit. Since Childhood Che was affected by acute asthma even then he loved swimming,ruby etc.Since Che's parents were leftist leaning he was incorporated with wide political teachings.Che father declared his son as"the first thing to note is that in my son's veins flowed the blood of the Irish rebels." So Che had great affinity towards the poor.

Che home had a stock of over 3,000 books.His favorite author are  Marx,Lenin,Engels,Robert Frost etc.Che had keen interest in politics,philosophy,mathematics etc.Che had wide interest over  exploring World.Che two motor Rally first on 1950 about 4,800 km in inter Argentine.second rally on 1951 about 5000 km over entire south America.Che and his friend Alberto Granado spend few weeks in lepers colony of amazon bank after a year college break up. The lepers gifted him with a mambo-tango wooden raft.

Che showed strong oppression against the capitalist.He had a link with Cuban leader Castro.He joined the Cuban revolutionary group as a doctor and took part in a journey towards the Cube in Grahnma. On Viewing the Che fighting spirit Castro promoted him as Chief of group which won the Santa Clara fight and removed Batista government from Cuba.Che Brought lots of Land Reforms,Nationalization,Economic reforms etc.Che spent key role in Bay of Pigs,Soviet union,Cold war etc.Che also visited India,China,Sri Lanka,Vietnam and many more countries.Che resigned his minster post took part in rebel movement of Congo and Bolivia.

Che had exemplary personal life even being minister he worked as a food carriage,motor shed etc.Che fell in love with Aleida March during 26th July movement.Which End his marriage life with Hilda.Che Social life was well inspired by personal life.

When Che took up the Bolivia rebel movement and during the final moment. he was  encircled by more than 3,000 soldiers,CIA.he was caught wounded and taken to a school at La higeru. On OCT 9,1967 he was executed by Bolivian Army Solider Mario Teria.t, Che Guevara told his executioner, "I know you've come to kill me. Shoot, coward! You are only going to kill a man!".Che Was bisected into pieces and buried across Bolivia.

The Reminiscences of Cuban Revolution

Spread across the Globe Youth t-shirts and heart.

Memorial across the Globe.

Time Magazine named him as 100 most influential people of the 20th century.

"I am not a liberator. Liberators do not exist. The people liberate themselves."

"If you tremble with indignation at every injustice, then you are a comrade of mine."

"The life of a single human being is worth a million times more than all the property of the richest man on earth."