The very first modern Olympic Games opened in the first week of April 1896. Since the Greek government had been unable to fund construction of a stadium, a wealthy Greek architect, Georgios Averoff, donated one million drachmas (over $100,000) to restore the Panathenaic Stadium, originally built in 330 BCE, with white marble for the Olympic Games. 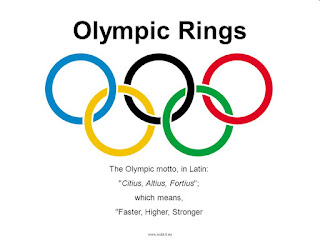 Since the Games were not well publicized internationally, contestants were not nationally chosen but rather came individually and at their own expense. Some contestants were tourists who happened to be in the area during the Games. Athletes wore their athletic club uniform rather than a national team one.

Pole vaulting, sprints, shot put, weight lifting, swimming, cycling, target shooting, tennis, marathon and gymnastics were all events at the first Olympics. The swimming events were held in the Bay of Zea in the Aegean Sea. Gold medalist, Alfred Hoyos Guttmann described it: "I won ahead of the others with a big lead, but my greatest struggle was against the towering twelve-foot waves and the terribly cold water."Approximately 300 athletes participated, representing thirteen countries.

Created by Pierre de Coubertin in 1914, the Olympic flag contains five interconnected rings on a white background. The five rings symbolize the five significant continents and are interconnected to symbolize the friendship to be gained from these international competitions. The rings, from left to right, are blue, yellow, black, green, and red. The colors were chosen because at least one of them appeared on the flag of every country in the world. The Olympic flag was first flown during the 1920 Olympic Games.

Pierre de Coubertin wrote an oath for the athletes to recite at each Olympic Games. During the opening ceremonies, one athlete recites the oath on behalf of all the athletes. The Olympic oath was first taken during the 1920 Olympic Games by Belgian fencer Victor Boin. The Olympic Oath states, "In the name of all competitors, I promise that we shall take part in these Olympic Games, respecting and abiding by the rules that govern them, in the true spirit of sportsmanship, for the glory of sport and the honor of our teams."

Pierre de Coubertin got the idea for this phrase from a speech given by Bishop Ethelbert Talbot at a service for Olympic champions during the 1908 Olympic Games. The Olympic Creed reads: "The most important thing in the Olympic Games is not to win but to take part, just as the most important thing in life is not the triumph but the struggle. The essential thing is not to have conquered but to have fought well."

The Olympic Hymn, played when the Olympic Flag is raised, was composed by Spyros Samaras and the words added by Kostis Palamas. The Olympic Hymn was first played at the 1896 Olympic Games in Athens but wasn't declared the official hymn by the IOC until 1957. 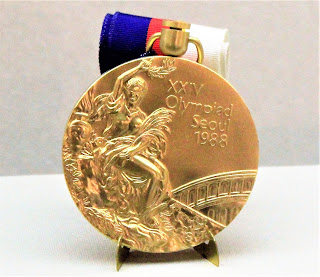 The last Olympic gold medals that were made entirely out of gold were awarded in 1912.

The Olympic medals are designed especially for each individual Olympic Games by the host city's organizing committee. Each medal must be at least three millimeters thick and 60 millimeters in diameter. Also, the gold and silver Olympic medals must be made out of 92.5 percent silver, with the gold medal covered in six grams of gold.

The first opening ceremonies were held during the 1908 Olympic Games in London.

A City, Not a Country

When choosing locations for the Olympic Games, the IOC specifically gives the honor of holding the Games to a city rather than a country.

James B. Connolly (United States), winner of the hop, step, and jump (the first final event in the 1896 Olympics), was the first Olympic champion of the modern Olympic Games.

In 490 BCE, Pheidippides, a Greek soldier, ran from Marathon to Athens (about 25 miles) to inform the Athenians the outcome of the battle with invading Persians. The distance was filled with hills and other obstacles; thus Pheidippides arrived in Athens exhausted and with bleeding feet. After telling the townspeople of the Greeks' success in the battle, Pheidippides fell to the ground dead. In 1896, at the first modern Olympic Games, a race of approximately the same length in commemoration of Pheidippides.

The Exact Length of a Marathon

During the first several modern Olympics, the marathon was always an approximate distance. In 1908, the British royal family requested that the marathon start at Windsor Castle so that the royal children could witness its start. The distance from the Windsor Castle to the Olympic Stadium was 42,195 meters (or 26 miles and 385 yards). In 1924, this distance became the standardized length of a marathon.

Women were first allowed to participate in 1900 at the second modern Olympic Games.

In 1960, the Winter Olympic Games were held in Squaw Valley, California (United States). In order to bedazzle and impress the spectators, Walt Disney was head of the committee that organized the opening day ceremonies. The 1960 Winter Games Opening Ceremony was filled with high school choirs and bands, releasing of thousands of balloons, fireworks, ice statues, releasing of 2,000 white doves, and national flags dropped by parachute.

Though Russia had sent a few athletes to compete in the 1908 and 1912 Olympic Games, they did not compete again until the 1952 Games.

The first recorded ancient Olympic Games were held in 776 BCE with only one event - the stade. The stade was a unit of measurement (about 600 feet) that also became the name of the footrace because it was the distance run. Since the track for the stade (race) was a stade (length), the location of the race became the stadium.

An Olympiad is a period of four successive years. The Olympic Games celebrate each Olympiad. For the modern Olympic Games, the first Olympiad celebration was in 1896. Every four years celebrates another Olympiad; thus, even the Games that were cancelled (1916, 1940, and 1944) count as Olympiads. The 2004 Olympic Games in Athens was called the Games of the XXVIII Olympiad.

Even before the start of the event, controversies revolving around Dow Chemical Company, Games’ official sponsor, hit the 2012 London Games with many calling for the withdrawal of the said company as its sponsor. Critics argued that the top Olympic sponsor should not be involved in the project because of its links to a company accused in the 1984 gas leak in Bhopal, India.

The 1936 Olympic Games, now known to many as ‘Hitler Olympics’, was also noted for the infamous snub by Hitler to American athlete Jesse Owens. Owens won four gold medals in the Games, a feat in clear contrast to Hitler’s views as he had intended the 1936 games to showcase his Aryan ideals and prowess. Owens’ medals included: one each in the 100 meters, the 200 meters, the long jump, and as part of the 4x100 meter relay team. Hitler later refused to shake his hand or hand him his medals. 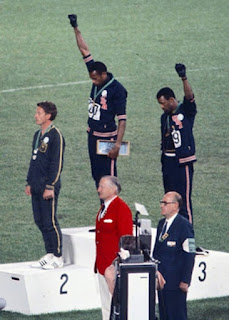 The black power salute is considered as one of the most powerful political statements made in the history of the Olympics. It was a protest made by two African American athletes Tommie Smith and John Carlos at the 1968 Olympics in Mexico City on October 16, 1968 by raising their fists at the podium after the 200m race. Tommie Smith won the 200 meter race in a world-record time of 19.83 seconds, with Australia`s Peter Norman second and the US` John Carlos in third place. The two US athletes received their medals shoeless, but wearing black socks, to represent black poverty. Smith wore a black scarf around his neck to represent black pride; Carlos had his tracksuit top unzipped to show solidarity with all blue collar workers in the US.

the 1980 Moscow Olympics was marred by the boycotting of the United States and a number of other countries because of the Soviet invasion of Afghanistan. The American president Jimmy Carter issued an ultimatum on January 20, 1980 that the US would boycott the Moscow Olympics if Soviet troops did not withdraw from Afghanistan within one month. According to reports, sixty-five countries did not participate in the Olympics despite being invited. While most of these did not go to Moscow because of the boycott, a number did not participate for economic reasons.

Canadian sprinter Ben Johnson was stripped of the title after he was tested positive for stanozolol three days after setting a world record and winning the 1988 Olympic gold. Johnson beat Lewis in the 100m final at the Olympics on September 24, lowering his own world record to 9.79 seconds. He won one gold and two bronze medals during the 1988 Olympic Games in Seoul, South Korea. Later, he admitted to doping when he set a world record in 100m sprint during the 1987 World Championships in Athletics

A Palestinian group Black September held hostage members of the Israeli Olympic team on 5th September and eventually killed during the 1972 Summer Olympics in Munich. The Palestinians demanded the release of 234 prisoners held in Israeli jails. In the process the kidnappers had killed eleven Israeli athletes and coaches and a West German police officer.