According to historical records, the first ancient Olympic Games can be traced back to 776 BC. They were dedicated to the Olympian gods and were staged on the ancient plains of Olympia. They continued for nearly 12 centuries, until Emperor Theodosius decree in 393 A.D. that all such "pagan cults" be banned.

Olympia, the site of the ancient Olympic Games, is in the western part of the Peloponnese which, according to Greek mythology, is the island of "Pelops", the founder of the Olympic Games. Imposing temples, votive buildings, elaborate shrines and ancient sporting facilities were combined in a site of unique natural and mystical beauty. Olympia functioned as a meeting place for worship and other religious and political practices as early as the 10th century B.C. The central part of Olympia was dominated by the majestic temple of Zeus, with the temple of Hera parallel to it.

The Games and religion

The Olympic Games were closely linked to the religious festivals of the cult of Zeus, but were not an integral part of a rite. Indeed, they had a secular character and aimed to show the physical qualities and evolution of the performances accomplished by young people, as well as encouraging good relations between the cities of Greece. According to specialists, the Olympic Games owed their purity and importance to religion.

The Olympic victor received his first awards immediately after the competition. Following the announcement of the winner's name by the herald, a Hellanodikis (Greek judge) would place a palm branch in his hands, while the spectators cheered and threw flowers to him. Red ribbons were tied on his head and hands as a mark of victory.

The official award ceremony would take place on the last day of the Games, at the elevated vestibule of the temple of Zeus. In a loud voice, the herald would announce the name of the Olympic winner, his father's name, and his homeland. Then, the Hellanodikis placed the sacred olive tree wreath, or kotinos, on the winner's head.

The oldest myth which concerns the beginning of the Olympic Games is that of Idaios Daktylos Herakles. According to other myths, Zeus, the father of humanity, fought and defeated Cronus in a struggle for the throne of the gods. Finally, the well-known demigod Herakles is mentioned. He staged games in Olympia in honour of Zeus, because the latter had helped him conquer Elis when he went to war against Augeas.

Zeus was considered the most important of all the Olympic gods. He was originally worshipped as a god of meteorological change. He quickly became the god of fertility however, and was worshipped as Zeus the "infernal" (hthonios) or "farmer" (georgos). As Zeus the possessor (ktisios), he offered a good harvest; as Zeus the father (pater), he protected the family and all who lived nearby. 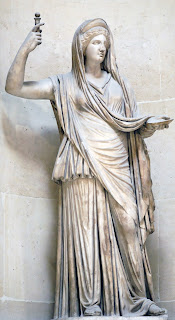 Hera was the sister and wife of Zeus and was worshipped all over Greece, but especially in the region of Argos. She was thus also called "Argeia". The epithets "perfect", "balanced" and "wedded" were used to describe her because she was considered the protector of marriage and the marital bond. Homer depicts Hera in her dual capacity as the most important female deity, but also the official spouse of the father of the gods.

The ancient Greeks believed that Athena was miraculously born out of the head of Zeus. She was first worshipped in the palaces of the Achaean rulers in the Pre-Hellenistic period. In Homer’s work, she is depicted as a warrior goddess wearing full armour from the prehistoric era. She was as important as Aris, the god of war, and favoured the prudent outcome of confrontations.

Apollo was the god of moral order and music, but his main capacity was to protect the art of divination. This is revealed by the plethora of oracles in various regions of Greece, the most famous being the oracle of Delphi, in Fokis. Apollo is also seen as a pastoral god, protecting his flock from the wolves. He was worshipped by the farmers as the god of the harvest. From Antiquity onwards, he had the reputation of a god of healing.

The Pentathlon became an Olympic sport with the addition of wrestling in 708 B.C., and included the following:

Athletes used stone or lead weights called halteres to increase the distance of a jump. They held onto the weights until the end of their flight, and then jettisoned them backwards.

The discus was originally made of stone and later of iron, lead or bronze. The technique was very similar to today's freestyle discus throw.

This was highly valued as a form of military exercise without weapons. It ended only when one of the contestants admitted defeat.

Boxers wrapped straps (himantes) around their hands to strengthen their wrists and steady their fingers. Initially, these straps were soft but, as time progressed, boxers started using hard leather straps, often causing disfigurement of their opponent's face.

This was a primitive form of martial art combining wrestling and boxing, and was considered to be one of the toughest sports. Greeks believed that it was founded by Theseus when he defeated the fierce Minotaur in the labyrinth.

These included horse races and chariot races and took place in the Hippodrome, a wide, flat, open space.

Through the 12 centuries of the Olympic Games, many wonderful athletes competed in the stadium and the hippodrome of ancient Olympia's sacred area, moving the crowds with their great achievements. Although mortal, their Olympic victories immortalised them. Of the best athletes who left their mark on the sacred valley of Olympia, some surpassed all limits and became legends by winning in successive Olympic Games and remaining at the forefront of their sport for more than a decade. It is worth mentioning some of their extraordinary achievements, which, even by today's standards, would be the envy of athletes such as Nurmi, Zatopek or Lewis.

All free male Greek citizens were entitled to participate in the ancient Olympic Games, regardless of their social status. Orsippos, a general from Megara; Polymnistor, a shepherd; Diagoras, a member of a royal family from Rhodes; Alexander I, son of Amyndas and King of Macedonia; and Democritus, a philosopher, were all participants in the Games.

Married women were not allowed to participate in, or to watch, the ancient Olympic Games. However, unmarried women could attend the competition, and the priestess of Demeter, goddess of fertility, was given a privileged position next to the Stadium altar.

Astylos of Croton in southern Italy won a total of six victory olive wreaths in three Olympiads (488-480 B.C.) in the stade and the diaulos (twice the stade) events. In the first Olympiad, he ran for Croton and his compatriots honoured and glorified him. In the two successive Olympiads, however, he took part as a citizen of Syracuse. The people of Croton punished him by demolishing his statue in their city and converting his house into a prison.

Milon, a pupil of the philosopher Pythagoras, was one of the most famous athletes in Antiquity. He came from the Greek city of Croton in southern Italy. He was six times Olympic wrestling champion. He first won in 540 B.C., in the youth wrestling event, and then five times in men's wrestling. This is a unique achievement even in today's competition context. He also won seven times in the Pythian Games, nine times in the Nemean Games, ten times in the Isthmian Games and innumerable times in small competitions. In the 67th Olympiad (512 B.C.), in his seventh attempt for the championship, he lost to a younger athlete, Timasitheus. There are many accounts of his achievements.

Leonidas of Rhodes was one of the most famous runners in Antiquity. His was a unique achievement, even by today's standards. For four consecutive Olympiads (164-152 B.C.), he won three races, - the stade race, the diaulos race and the armour race. He won a total of 12 Olympic victory wreaths. He was acclaimed as a hero by his compatriots.

Melankomas of Caria was crowned Olympic boxing champion in 49 B.C., and was a winner in many other events. He went down in history for the way in which he fought. His movements were light, simple and fascinating. He would defeat his opponents without ever being hit himself, nor ever dealing a blow. He was reputed to fight for two days holding his arms out without ever lowering them. He attained his excellent competitive form through continuous and strenuous exercise.

Kyniska, daughter of King Archidamos of Sparta, was the first woman to be listed as an Olympic victor in Antiquity. Her chariot won in the four-horse chariot race in the 96th and 97th Olympiads, (396 B.C. and 392 B.C. respectively). In the Olympic Games, it was forbidden for women to be present and Kyniska broke with tradition, since, in the equestrian events, the victory wreath, or kotinos, was won by the owner, not the rider, of the horse.

June 17, 2021
The very first modern Olympic Games opened in the first week of April 1896. Since the Greek government had been unable to fund construction of a stadium, a wealthy Greek architect, Georgios Averoff, donated one million drachmas (over $100,000) to restore the Panathenaic Stadium, originally built in 330 BCE, with white marble for the Olympic Games. Since the Games were not well publicized internationally, contestants were not nationally chosen but rather came individually and at their own expense. Some contestants were tourists who happened to be in the area during the Games. Athletes wore their athletic club uniform rather than a national team one. Pole vaulting, sprints, shot put, weight lifting, swimming, cycling, target shooting, tennis, marathon and gymnastics were all events at the first Olympics. The swimming events were held in the Bay of Zea in the Aegean Sea. Gold medalist, Alfred Hoyos Guttmann described it: "I won ahead of the others with a big lead, but my greates
29 comments
Read more