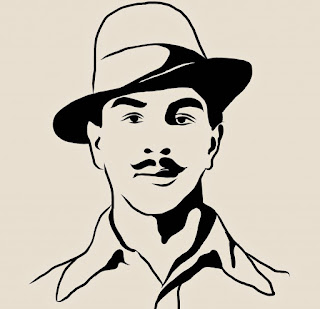 One of the most inspirational icons of the Indian freedom struggle, Bhagat Singh was born on September 28, 1907 in the Khatkar Kalan village near Banga in the Lyallpur district of Punjab. Born into a Sikh family with a proud legacy of revolutionary activities against the British rule, Bhagat Singh cultivated his revolutionary zeal from a tender age.

The notorious Jalianwala Bagh Massacre in 1919 left an indelible scar on the mind of Bhagat Singh and soon he took up the membership of the youth organization Naujawan Bharat Sabha. Apart from mingling with noted revolutionaries such as Chandrasekhar Azad, Bhagat Singh worked relentlessly to garner opposition against the British.

In 1928, when the Simon Commission came to India, it was met with peaceful protests all over the country. During one such protest march in Lahore on October 30, veteran leader Lala Lajpat Rai was mercilessly beaten up by police chief Scott and Lala later succumbed to the fatal injuries. Bhagat Singh, who witnessed this macabre incident, hatched a conspiracy to kill Scott but in an unfortunate case of mistaken identity, DSP J.P. Saunders fell to the revolutionaries' bullets instead of the police chief.

Bhagat Singh went into hiding to escape prosecution, but when the British government enacted the draconian Defence of India Act, Bhagat and his comrades at the Hindustan Socialist Republican Association again planned to detonate a bomb in the assembly where the ordinance was going to be passed. As per the plot, on April 8, 1929, Singh and Batukeshwar Dutt stormed inside the court and threw bombs onto the corridors of the assembly shouting "Inquilab Zindabad." Both Singh and Dutt voluntarily courted arrest and they were sentenced to ' Transportation for Life' for the incident.

But soon the British got wind of Bhagat Singh's involvement in the killing of Saunders and along with Sukhdev and Rajguru, he was charged with murder. True to his fearless soul, Bhagat Singh owned responsibility of the murder and justified the act in a fiery statement. After a farcical trial lasting five months, on March 23, 1931, Bhagat Singh was hanged in Lahore with his fellow comrades Rajguru and Sukhdev.

[On January 21, 1930, the accused in the Lahore Conspiracy Case appeared in the court wearing red scarves. As soon as the magistrate took his chair they raised slogans "Long Live Socialist Revolution", "Long Live Communist International", "Long Live People" "Lenin's Name Will Never Die", and "Down with Imperialism". Bhagat Singh then read the text of this telegram in the court and asked the magistrate to send it to the Third International.]

On Lenin Day we send hearty greetings to all who are doing something for carrying forward the ideas of the great Lenin. We wish success to the great experiment Russia is carrying out. We join our voice to that of the international working class movement. The proletariat will win. Capitalism will be defeated. Death to Imperialism.