Over 60 years of Indian Independence adored and cherished Gandhi & Congress men as veteran of the Freedom struggle. We never took the intention to respect the fellow persons who lost their lives in the freedom struggle. Our history books even forget to print a line about this movement's contribution to Independence. Let's take a moment to honor such a person in the hundred years of their movement. A movement started outside India even decades before Netaji to revolt against the British Imperial rule.

Ghadar Movement started on early 1913 by the migrated Punjabi Indians in U.S & Canada. During pre-World War I many commonwealth nations accepted Punjabi's due to their loyalty to the British empire. Ghadar party was formerly pacific ocean Hindustan association formed by Har Dayal. The situation in Canada And U.S were reverse a restriction imposed for South Asian Migration. Ghadar means revolt or rebellion. A Ghadar movement was started with an intention of revolutionary socialism and Indian nationalism to defeat British Imperialism. Ghadar party issued its first newspaper 'The Ghadar' on Nov 1,1913. News paper carried a caption stating  Angrezi Raj Ka Dushman (enemy of English rule) The members of party strongly believed in Ghadar ideology of "to stir up rebellion in India. Pay-death; Price-martyrdom; Pension-liberty; Field of battle-India" 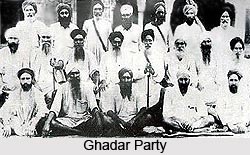 After the break of World War I many Ghadar left North America and landed in Punjab to join the revolt along with Babbar Akali Movement. Meanwhile, restrictions in Canada and the U.S increased to such an extent that Punjabi migrants (Komagata Maru) were not allowed to land on Canadian Soil in 1914. Which further sparked in Indian nationalist movement in Canada and U.S. A section Ghadarities left from San Francisco to Canton in a Ship Korea under leadership of Jawala Singh (along with 60 members.) At Canton, 150 more Indians joined the force along with arms that were supplied to them. Everyone was arrested on arrival at Calcutta.

A second set of members led by Karatar Singh, Pingle, Bushen Sen started their journey in SS salmini Ship in mid Oct 1914. On the way to India, Ghadar met Dr.Sun Yat Sen in China and asked his help for Indian Revolution. Dr.Sun Yat Sen refused to fight against British. They reached India and met Jatin Mukherjee. They started establishing contact with all underground Indian revolutionary groups in India. They met Rash Behari Bose in Benares, an effective revolutionary front to lead the rebellion against the British imperialism. By mid November 1914 more than 4000 ghadar's landed in Calcutta. Pingle and Sachin met Mula Singh in Amritsar, who organized ghadar in Shanghai.

Pingle returned from Amritsar to Benares on invitation of Rash Behari Bose to Jugantar leaders meeting for making final action plan. Bose proclaimed that "Die for Nation" inviting 12th Rifle regiment of Fort William through Havalidar Mansha Singh. They planed for a army mutiny for 2 months so that arms supplied from Germany reach India.Due to urgency of action from Ghadars, the bombs (self prepared) were transported to Lahore. A date was fixed for a coordinated combined revolt on Feb 21,1915. A plan was sketched on Feb 21 that 23rd Calvary of Punjab would kill its senior official on roll call and seize all its weapon. The mutiny would be passed on to 26th Punjab regiment. It would mark start of Indian Mutiny and revolution against the British

Many revolution arm robberies took place in Bengal and Punjab during 1914's to seize weapons for revolt. After strong underground activity on Feb 15,1915 Kirpal Singh a CID spy infiltrated into the mutiny planned  and revealed to British force.So conspiracy was thwarted before it came to force itself in the 23rd,26th,24th & 7th Rajput regiment. Planned revolt muted across Agra,Lahore etc. Thousands of Ghadarites were arrested in Central India & Punjab only Rash Behari Bose escaped to Japan. More than 42 members of the movement were sentenced to Cellular Jail,Andaman.

At the same time 1915, Indian Sepoys in 5th Infantry regiment Singapore rebelled. It lasted only for 7 days killing over 42 British officers around 200 Sepoys court Martialed around 42 executed on open road in Outram Road,Singapore. Over 15,000 crowds gathered to watch the execution of Indian Revolutionary over link with Ghadars. Similar mutiny planned similar to Ghadar revolt planned other related events like Annie lasrsen arms plot,Christmas day plot,Black tom Explosion etc. After America and British got involved in World War I British spies cracked that Germans have close links with the Ghadar in the U.S.A.

Hindu-German Conspiracy case filed against the Ghadars in U.S. After World War Ghadar Movement faction Into different sections some key members got involved in different movements like one of founders of Ghadar Party Baba Sohan Singh Bhakna moved to Communist party and Rash Behari Bose joined Indian National Army and became a prominent face of the movement. By the end of 1919 Ghadar Party ceased its political activity.  Its greatest movement of Indian history which was uncovered due to the shadow of Gandhi and congress. Lets salute this hero of India who last there life to liberate India from British Imperialism. Long Live there Name Long Live Revolution.......Good think to Know about them on the 100th year of their movement.