In the post 1991 period of the technology revolution and the raise of new liberal policies gave way to many new business management concepts. Jack Welch,a former anti-employee CEO of GE, was the one who formalized the most exploitative concept of 21th century in the appraisal system. In 1980's Welch introduced a concept to exploit employees in new way know as 'Stack Ranking' or 'Forced Ranking' or 'rank or yank' or 'Forced distribution' or 'Bell Curve' or 'Vitality Curve' etc. It's new concept that introduced to increase competitive environment, Increase production, divide workers unity, In equal distribution of wages, enable firing with poor performer, reduced overall wage rates, Changed work culture and wipe social security. 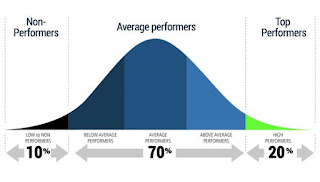 The system is implemented by all major corporate across the globe. In India, all new age corporate follow this appraisal concept. During the 20th century, across the globe there was a problem for corporate with continued raises in fixed hikes for all employees and the process of unionization. So some mechanism is required to minimize this effect of workers' unity. The system also creates an isolated work culture and way of life. Appraisal system not only depends on the performance of the individual but various other hidden baseless parameters were considered by the managers in the appraisal process. Core understanding of this system can be simply stated as "Survival Of the Fittest".

The problem in this system has three perspectives as technical flaws,cultural flaws and Indian flaws. This practice is based on 80-20 rule and pareto distribution curve.Where some people are granted high rating in appraisal process under a category high performance on other hand equal number of people given low rating. The distribution between the two extremes may not be equal like an exact bell curve but something like a power law curve. In between this both extreme variance lies a bulk number of average performers. The distribution of compensation is widely varied across the curve. One more outcome of the process is the sudden promotion's for high performers and pushing out low performers of the company. It's one way where these corporate companies drive out high salaried low performing aged employees and  pull in low salaried young employees. This gives corporate additional chances of pumping in fresh blood of employees into a high work time exploitative environment to increase productivity. This complete appraisal process hangs in the decision of the manager. So this process can never be a standard to judge an employee's performance since finally its going to be each employee's manager going to give a force rate. A team of high performance employees can never rate all its employees as high so the manager needs to distribute the rating. This system allows an employee of 10 years experience to be compared with fresher for the appraisal process, In no way this way of comparison can give justified rating for employees. It naturally tempts employees with feeling that an unworthy decision taken on them will quiet the company. Most companies want this to happen so they can keep getting fresh hands in productivity and destroy the concept of permanent jobs. They tempt more casual and contract employees.

Among employees this system creates negative thought process on fellow employees. The system makes team work a act of dynamics but individuality makes heavy production. The competitive environment developed by this system makes every employee fight individually, providing them with a salary hike rather than collective bargaining of unions for a common hike in the 20th century. So employees started to involve in isolated act of production This process created culture started to reflect in social life of the employees. They started to think about their social problem in an isolated environment and solve it individually  rather than a united approach of solving a social problem. It creates a attitude of superior for people with high performance and a stressful depression state for people in low performance cadre. This system also stagnant employees mind from developing them self rather then allow to experience new ideas.

In one way technically the system is wrong and other way system in cultural flaw. In India the system is further biased by some geographical identities. As I wrote previously the complete system hangs in the hands of employees manager decision, managers are like slave lords in India. Indian Managers are mostly biased in decision making during appraisal process. The parameter is not alone performance based in India it dependent on Manager's tit for tat , Manager's favoritism, caste, region, language, religion ,gender etc. Indian managers are mostly upper caste Hindu male dominated people seated to rate a diverse spectrum of employees. Most of the people getting this good rating/promotion are from upper caste is that mean other caste people not talented. It's biased nature to pull up people of their origin strongly in work culture. Managers use it as assault weapon to employees in wrong terms with him/her to rate low. Women's have additional problem from there male bosses as in the form harassment. They were not aware it was harassment but they needed to keep quiet. Women employee were saturated after certain level of hierarchy. Is it happen naturally? No, our common Indian male attitude about women saturating them from progress.  A women's are not qualified to do more than this work is deep imprinted in most of the male managers. This system completely wiped the rebel sprite of employees to question the managers of wrong doings.

Jack Welch introduced this system into GE corporation the productivity increased to pinnacle. During his tenure as CEO, company value rose by 4000% but other side employees were regularly thrown out with poor performer brands. One sample of GE is enough to showcase how much this appraisal system driven company value. Actually this growth is not reflected in the big deal in employee salary and job security of the employees. The system can make employees feel good but overall this appraisal system is a new way of exploitation of employees labor. It's the reason every time an employees union formed in a corporate office first demand would wipe out the appraisal system. So the solution for it may be a common fixed hike for all employees based on their seniority. Open promotion policy based on seniority and single window system. To achieve this, the Employee union is a must for our collective bargaining.  Let's keep marching towards a society without exploitation by keep uprooting system like this on the path.